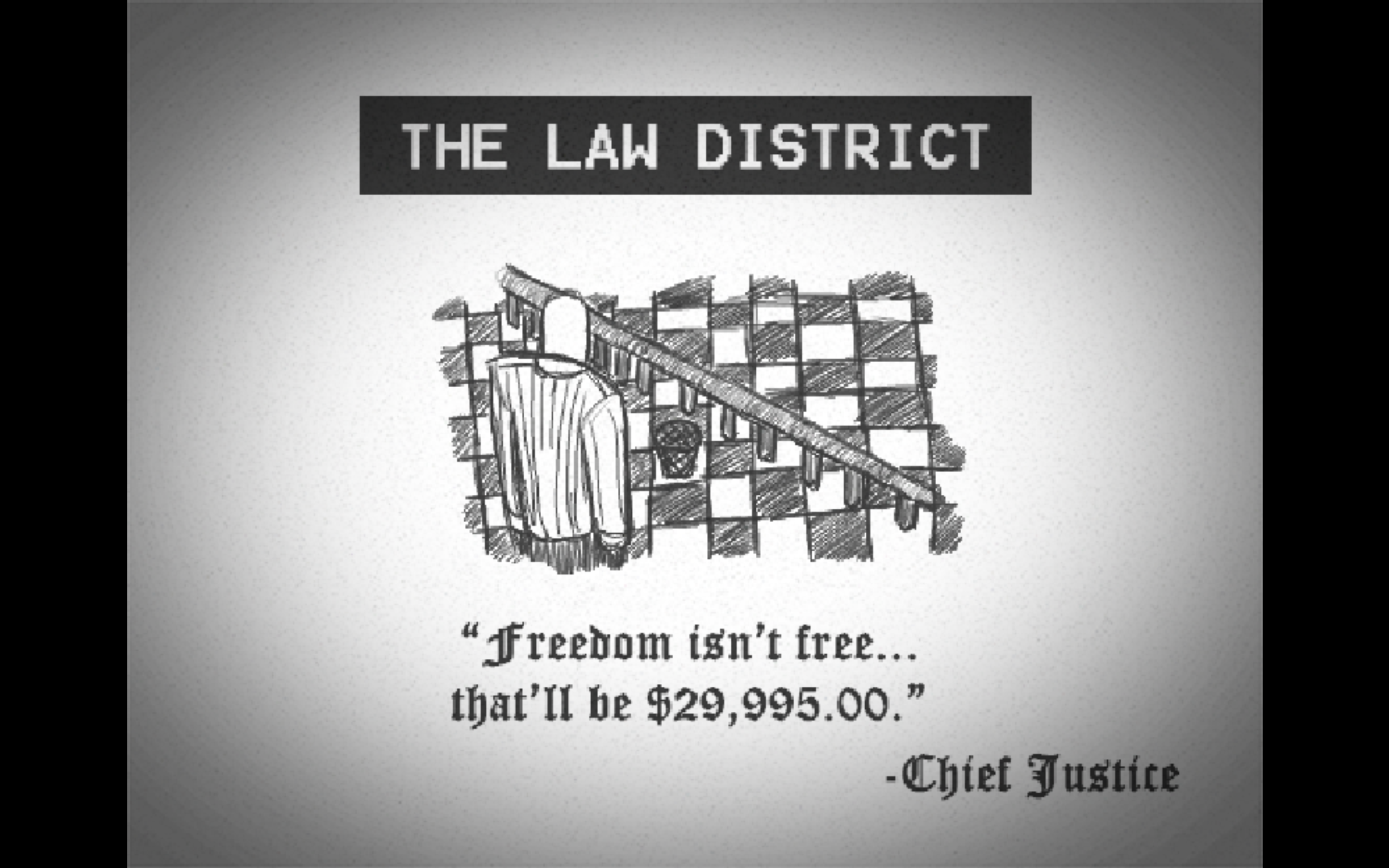 Serving justice with a few just-hits. Let’s continue our descent into corporate corruption with lobbying and other political favors.

Maybe it’s just me, but the Law District felt much shorter in comparison to the Office District – especially if you skip interacting with the politicians, lawyers, and businessmen within the district.

Granted, I did completely miss the interaction with Gurd and the trips of a lifetime that follow during my initial playthrough.

Politicians, lawyers, and businessmen within the Law District

Woah, there, Fyll… Thanks? If you continue the conversation, he will also give you $200.

Fyll in the Law District

Head all the way towards the back left-hand corner of the Law District for a few goodies and your first throw-down in this area.

Tussling with Hobo Bo shouldn’t take too long and shouldn’t leave you too scathed.

Go back towards the heart of the Law District and speak to a man named Juno, who is standing by the stairs of the left-wing of court house. Although he’s heard nothing about you, he’ll let you know the Leftist Leader is looking for a helping hand.

The left and right wing political lobbies within the Office District

Speaking to politicians within the left wing will warrant liberal/democratic and anti-right wing rhetoric.

While the right-wing lobby is certainly not as crowded with politicians, it feels quite crammed with by the filing cabinets full of guns, ammo, political promises, and bologna.

Although it’s a bit of running around, fulfilling these simple errands will yield you $1000 – sweet!

Now it’s time to explore the right-hand side of the Law District.

Right-hand side of the Law District

Heeding Herb’s advice, talking to “the mack out back” (Gurd) will open your mind’s eye to a dark or a very… odd point of view, depending on your choice of dialog. You may also buy Speed or Steroids from Gurd for $500 each.

“Yes” will send you into a dark underworld run by grotesque and unsettling creatures.

Opening your mind’s eye in the Law District gone wrong

Navigating your way through this hellscape of a trip gone wrong is certainly much more intimidating than it really seems.

You may occasionally encounter enemies who are not all too difficult to defeat. Towards the exit, you will encounter The Big Cheese. You will have to defeat him in order to finish the trip.

The aftermath of the “trip gone wrong”

On the other hand, responding “Hell yes” will send you into a much more colorful, “positive” trip.

Alternate opening of your mind’s eye in the Law District

Without a single enemy in sight, these interactions are short, bizarre, fourth-wall breaking, and border on flat-out nonsensical. Themes of sex and – naturally – drug use are also prevalent throughout the area.

I’ll leave you with these two quotes I found quite relatable before moving on.

Behind a crack in the wall of the furthest right-hand corner within the Law District you will find a cult leader and his followers praising “the chosen one” who just so happens to be you!

Cultists in the Law District

Enter the courthouse in the heart of the Law District. Inside, the receptionist, Terry Secra, will instruct you to attend the trial for Suits City v. Old Bag case in Hallway C.

Rummaging through the waste basket to the left of Terry will trigger a fight with Waste Basket Willy.

Waste Basket Willy in the lobby of the courthouse

Although many of the doors are locked, it’s definitely worth exploring Hallways A, B, D, and even other rooms within C before going straight for the courtroom you’ve been summoned to.

Hallways A, B, and D in the courthouse of the Law District

Within the first Hallway, A, you will find your good ol’ pal BigBuy Clerk back at it with the goods. Stock up and upgrade as needed.

Hallway B contains a basketball court, which is apparently the only sport legal in the city. Law and Basketball, am I right? A man on the court will ask you to pass the basketball. Interacting with the ball will prompt a relatively easy battle.

Behind a crack in the wall of Hallway D, you will find the sultan of sandwiches, who will generously (and seductively, ooh gasp) slip you seven sandwiches.

There is an additional courtroom within Hallway D, where a trial between a plant and a deadman is taking place.

The plantiff claims they shot the salesman with their pea shooter out of self defense for “trespassing” on their property. The salesman claims they weren’t trespassing, merely trying to pedal some fertilizer to the plant.

The supply closet and restroom in Hallway C of the courthouse.

Before entering the courtroom in Hallway C, pick up a roll of TP from the supply closet for the poor sap stuck on the toilet. He will thank you with a Fecal Case before you are attacked by Fecal Frankie.

After the judge calls you to the stand as a witness, he is essentially paid to rule in favor of Suits City. The “Old Bag” is sentenced to the Factory Fields for life all because she wouldn’t go through with the sale… I guess that’s just business.

A stranger will inspect your briefcase as you exit the courtroom. You will also receive a call from your boss, CEO Floyd Roberts, who will invite you back to his desk in the Office District.

Now’s the time to pay BigBuy Clerk a visit and really stock up.

As you leave the courthouse, you will be stopped by four guards who accuse you of carrying illegal corporate contraband. While it may seem intimidating, the fight is relatively easy so long as you utilize your cheap bombs and Jerome’s Staple Storm ability.

Unlocking the doors of the courthouse

Go into the security room in Hallway A of the courthouse to unlock the front doors of the lobby. The guard inside will challenge you to a brief and easy fight.

Chief Justice in the courthouse of the Law District

Chief Justice will attack you as you leave the security room in Hallway A. Justice hits HARD – TWICE as hard, as both halves of the chief attack as independent enemies, despite taking damage as one.

Chow down on sandwiches and chug water. Don’t forget to use Jerome’s staple down ability whenever possible, as it may give you a round or two to breathe by paralyzing Chief Justice.

CEO Floyd Roberts outside of the courthouse in the Law District

Floyd Roberts will confront you outside of the courthouse in the law district. Again, staple and sandwich it up as needed. You should make it through just fine.

After the (literal) boss fight, you will receive a Station 3 ticket and instructions to meet with a stranger on the roof of the W. Bank in the Financial District

A phone call with ??? outside of the courthouse in the Law District

I believe that’s as close as we’ll come to serving justice and getting our day in court within the Law District.

Up next, we’ll see what this mysterious stranger on the roof of W. Bank in the Financial District wants.

The aftermath of defeating CEO Floyd Roberts in the Law District

Keep an eye out for A Casual Review and Playthrough of Suits: a Business RPG | Part Four!

In the mean time, don’t forget to show Suits: a Business RPG a little love. Check it out on Steam and give the game a go yourself for just $0.99!

Stay tuned for blog posts and more this upcoming year. If you’re interested in having an article published on P³, please submit a contact form. 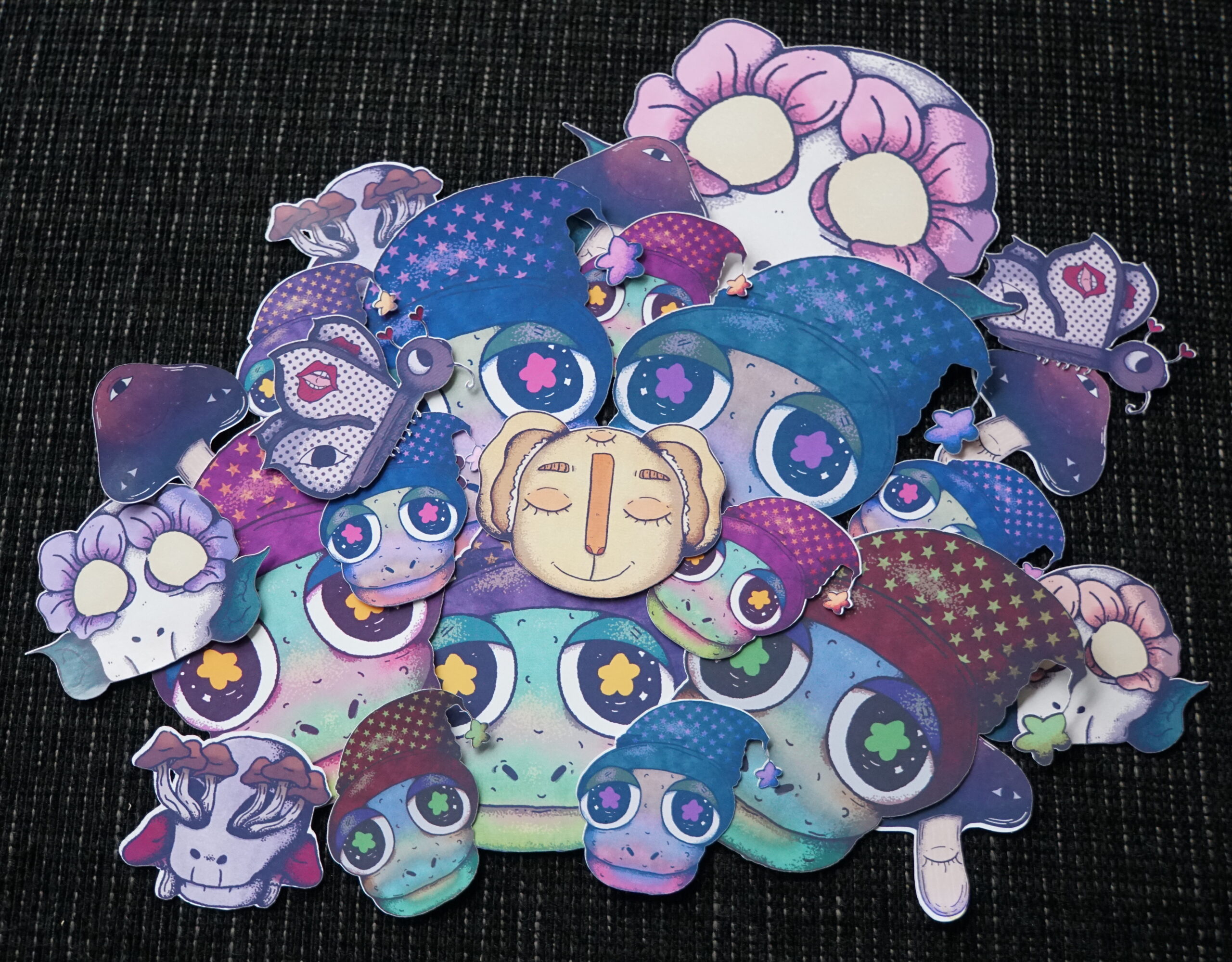 SONGS OF THE MONTH